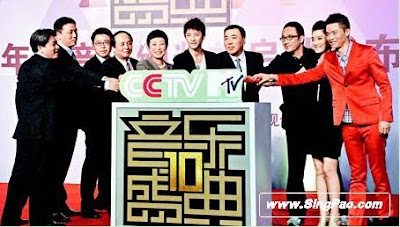 “Music Festival – The 2010 Music Awards Ceremony” that is jointly organised by China Central Television (CNTV) and MTV Music Channel, will be held on the 18th of October in Beijing. Yesterday (6th September), the organizers held the “Music Festival Launching Ceremony” in Beijing, and Han Geng attended the ceremony as the artist representative.

According to the news from Hong Kong’s “Sing Pao”, even after going solo from Korea’s popular group Super Junior, Han Geng’s popularity remains high. He, who had just released a solo album in July, has successfully been included in the nominees list of “China’s Favourite Male Singer of the Year” award, and will compete with Sun Nan, Huang Xiao Ming, and Chen Kun for the title.

It is reported that this award would be chosen through fan voting, but Han Geng, who has a huge fanbase, was exceptionally humble about his chances, saying that “They are all my seniors, so I don’t have much confidence in winning the award. I’m already very happy for being included in the list.” When asked about a fan that left the strongest impression in him, Han Geng laughed and said: “There was this extremely crazed female fan who kept on following me, and in the end she entered the gent’s washroom along with me, that time I was really shocked.”

Ask me anything , i will reply as soon as possible . xoxo